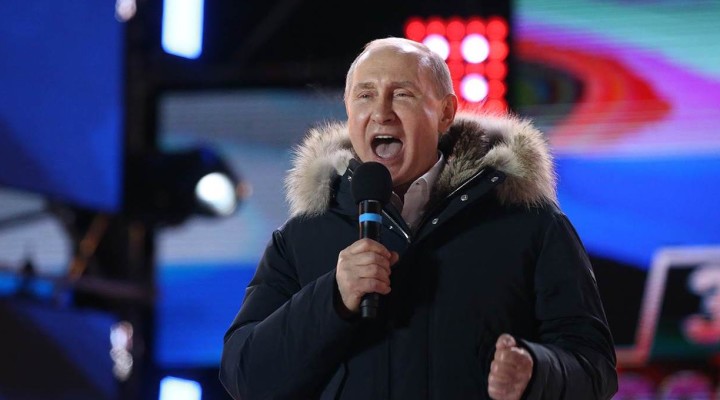 Russian President Vladimir Putin’s foreign incursions and public displays of militant nationalism have proved effective in winning over large swathes of the Russian electorate. But they have also turned Russia into an economic lightweight, and left it increasingly isolated on the world stage.

STOCKHOLM – Vladimir Putin’s reelection to a fourth term as Russia’s president was a foregone conclusion. The Kremlin undoubtedly orchestrated ballot-box stuffing and other measures to ensure that Putin received at least 70% of the vote across all regions. Yet, even without such shenanigans, Putin probably still would have cruised to victory on the nationalist wave created by his 2014 annexation of Crimea.

Less predictable than the election outcome is Putin’s policy agenda for the next six years. The Russian economy is showing some signs of improvement, but growth remains far weaker than in the boom years of Putin’s first years in power. At the same time, the diplomatic divide between Russia and the West continues to widen.

Putin has assembled competing teams of economists to draft policy proposals for the coming years, but few observers expect genuine reforms to follow. The economy’s long-term prospects will remain dim as long as the security state maintains its hold on Russian businesses and society.

Moreover, it is hard to see how Russia can improve its economy without first improving its relations with the West. The investments needed to boost growth are being held back by Russia’s limited access to key technologies and global financial markets, and by sanctions on Russian companies and oligarchs close to Putin.

Putin apparently believed that the West’s reaction to his aggression in Ukraine would be short-lived, as it was after Russia’s military intervention in Georgia in 2008. When that turned out not to be the case, and Western sanctions became increasingly painful, the Kremlin began seeking investment and trade opportunities with China.

But the Kremlin’s hope of a deeper partnership with China was dashed when Chinese President Xi Jinping invited US President Donald Trump to a state dinner in Beijing’s Forbidden City – an honor never extended to a Soviet or Russian leader. Likewise, the prospect of warmer ties with the US has gone up in smoke, owing to revelations of Russian meddling in the US 2016 election.

Finally, in Syria, Putin has proclaimed “Mission accomplished” time and again, yet Russian mercenaries on the ground there keep dying. To be sure, Russia has been able to test new military hardware while shoring up Syrian President Bashar al-Assad’s regime. But peace and stability are still nowhere in sight.

Trying to exude confidence in his annual address to the Federal Assembly this month, Putin nonetheless revealed his fears about the future. For example, his promise of economic growth was familiar, but he was far more explicit than usual in warning that Russia could fall behind other countries. “The speed of technological progress is accelerating sharply,” he observed. “Those who manage to ride this technological wave will surge far ahead. Those who fail to do this will be submerged and drown in this wave.” There can be little doubt that Russia currently risks drowning.

Similarly, Putin devoted the bulk of his speech to a multimedia show of sophisticated new strategic weapons: super-heavy intercontinental ballistic missiles, hypersonic strategic attack weapons, gigantic futuristic underwater torpedoes, and nuclear-powered cruise missiles with unlimited range. But in his attempt to prove that Russia can overcome any new strategic defense measures the US might put in place, Putin betrayed his fear that Russia’s strategic nuclear arsenal could be rendered irrelevant.

Aside from Russia’s nuclear arsenal and the veto power that it enjoys as a permanent member of the United Nations Security Council, its foundation of strategic influence is weak. Even after adjusting for differences in purchasing power, Russia’s economy is closer in size to Italy’s. If Putin is serious about sustaining a strategic arms race with the US, he will have to force significant sacrifices on other key economic sectors – and a lower standard of living on ordinary Russians.

On the other hand, Putin recently expressed openness to deploying a UN peacekeeping mission in Ukraine’s Donbas region. And it is possible that his gadget show was meant to underscore the need for more strategic arms control and open dialogue. If so, he chose an odd way to convey that message.

Even if Putin did want to open a dialogue with the West, one cannot ignore the nerve-agent attack on former Russian double agent Sergei Skripal and his daughter in Salisbury, England, this month. As with the 2006 polonium attack that killed Russian defector and former spy Alexander Litvinenko, the British government has concluded that the Kremlin ordered the operation against the Skripals.

Russian security agencies may have a “license to kill” defectors with whatever sophisticated methods they can muster. But, like the polonium attack a decade ago, the first-time use of a sophisticated nerve agent, Novichok, did not go undetected, and the Kremlin is now resorting to a crude arsenal of lies and disinformation to try to hide its tracks. Needless to say, a regime that murders and lies is not an inviting partner for cooperation.

But this doesn’t make serious talks between US and Russia any less necessary. Both countries are modernizing their nuclear arsenals, and there is a real risk that new technologies could erode longstanding arms-control measures or render them obsolete.

The future of Putin’s extended reign is highly uncertain. Domestic reforms are not likely to be forthcoming, and the Kremlin’s unleashing of its security forces abroad has undermined the prospect of rapprochement with the West. While a new arms race would pose significant dangers for Russia – and for everyone else – it would also almost certainly bring the country to ruin, as the Soviet Union’s last leaders could no doubt attest.

Carl Bildt was Sweden’s foreign minister from 2006 to October 2014 and Prime Minister from 1991 to 1994, when he negotiated Sweden’s EU accession. A renowned international diplomat, he served as EU Special Envoy to the Former Yugoslavia, High Representative for Bosnia and Herzegovina, UN Special Envoy to the Balkans, and Co-Chairman of the Dayton Peace Conference. He is Chair of the Global Commission on Internet Governance and a member of the World Economic Forum’s Global Agenda Council on Europe.