Dr. Hawrylyshyn, a prominent intellectual, researcher, educator, humanist and simply a Great Ukrainian, had passed away on 24 October 2016, aged 90, in Kyiv. He was a figure of international stature and importance. Born in pre-war Ukraine to a family of pheasants in a village of Ternopil province, taken out of the country by the Nazis in 1944, he emigrated to Canada after WWII. Twelve years in Canada as lumberjack, inventor and manager, he then achieved MSc (University of Toronto) and PhD in Economics (University of Geneva). He continued his career in business education in Switzerland where he became a faculty member, then – until 1986 – a Director of the prestigious International Management Institute (Geneva). Author of numerous articles, books and international bestseller “Roadmaps to the Future”, a member of the Club of Rome, he coached and consulted executives from many multinationals, advised governments on sustainable development and competitiveness (effectiveness of countries). Dr. Bohdan Hawrylyshyn was a member of Academy of Sciences of Ukraine, World Academy of Arts and Sciences, he sat at the boards of directors of Resources for the Future in Washington and the Vienna Academy for the Study of the Future. Honorary Doctorates in Law from the universities of York, Toronto and the university of Alberta, chairman of the council of advisers to the Parliament of Ukraine and adviser to the President of Ukraine in 1990s, chairman of International Renaissance Foundation Kiev.

Driven by desire to help Ukraine Dr. Hawrylyshyn established International Management Institute in Kyiv in 1989 to promote business education and offer first ever MBA degree to Ukrainian executives. I had a great honour to be his associate and take part in those first endeavours back in late 1980s-early 1990s as well as to to lead IMI-Kyiv as a president in 2006-2007. He was a great Ukrainian, a great Teacher, a great Visionary and a great Thinker. His unbendable trust in Ukraine’s greater future is what keeps our spirits still high in these difficult times.

As a tribute to Dr. Hawrylyshyn’s amazing visionary capacity, I am publishing, for the first time, conclusions of unique research “Ukraine: Country Assessment”. At his initiative and under the IMI-Kyiv auspices, in spring of 1992, a large and representative group of Ukraine’s political, intellectual and cultural elite (some 70-100 people, including members of parliament, academia, novelists, poets and artists) was brought together for one-day brain storming session with the aim to analyse Ukraine’s competitive advantages and shape a possible roadmap for the future. It was a unique gathering of bright individuals and creative personalities. Those were still very very early days of Ukraine’s independence. People were naïve and enthusiastic, academics – honest and persuasive, politicians – incorrupt and motivated by a great national idea, an independent, modernised and highly competitive Ukraine.

Dr. Bohdan Hawrylyshyn proposed a methodology (attached with his own handwriting in the boxes) based on his interpretation of Michael Porter’s country competitiveness matrix. Then eight groups of factors that shape a country’s effectiveness (competitiveness) are analysed: natural resources, population, know-how, investment, ecology, values, political institutions and economic system/structure.

Here are the main conclusions by Ukraine’s elite in early 1990s on the main competitiveness factors as well as the future of the country:

1. Endowments in Natural Resources: score 3.12 (with a vision at 3.73). Overall factor rating that characterises natural resources as well as climate and topography was undoubtedly positive (somewhere between “good” and “a strength a comparative advantage”. However, “resources can be important but they are not indispensable”, writes Dr. Hawrylyshyn, “History shows… that the availability of resources is not sufficient to trigger off or to sustain economic performance”.[1] For such a country as Ukraine development of comprehensive and far-sighted national strategy for the use and conservation of natural resources could be more important for sustainable long-term growth than the immediate and thoughtless utilization of the rich resource endowment. (War-related shock demonstrated Ukraine’s remaining dependence and vulnerability to natural resource factor – comment by YP).

2. Population: score 2.63 (with a vision at 3.24). Relative rating of various individual factors – population size (in-between “on par with majority of countries” and “comparative advantage” grades), declining rates of its growth (“a handicap, disadvantage”), average distribution over age, rural/urban, cultural homogeneity (“on par with majority of countries” but better than in Russia), employment and its distribution (“a handicap”) – produced the overall factor rating of “disadvantage” but still very close to “on par” with a visible trend for slight improvement in the medium-term future. (Unfortunately, Ukraine’s large but continuously shrinking population and increasingly adverse demographic trends have turned this factor into more of a drag than a driver factor).

3. Know-how: score 2.49 (with a vision at 3.36). This part of study, except scoring, was lost. But it can be seen that at that time people estimated this factor as being between “poor” and “good” with a potential to become in the 10-year perspective and beyond something between “good” and “a comparative advantage”. (There have been a real breakthrough with ICT technologies in Ukraine but this still is not enough to compensate for the loss or decline in manufacturing and machine building).

4. Investment: score 1.45 (with a vision at 3.05). Overall factor rating for the investment had been estimated as something between “great weakness” and “disadvantage” that during the forthcoming ten-year period had all the chances to shift more towards the “on par” position. As the market reforms and privatization had taken more stable root, personal savings as well as corporate profits should have become major sources for investment and necessary structural changes. (Which, unfortunately, they haven’t. Deep crisis of the banking sector, poor corporate finances and increased war-related investment risks are putting modernisation plans at risk).

5. Ecology: score 1.30 (with a vision at 2.56). Unfortunately, Ukraine scored very little as the state of its ecology is concerned, which could be considered at this moment as being a great weakness, with a very little prospect for significant improvements in the coming decade, unless current trends are reversed. (This has remained, for variety of reasons, including lack of coherent government policy and funding, a factor dragging the country down).

6. Values: score 2.49 (with a vision at 3.11). As the corresponding part was lost, the scoring tells us that Ukraine’s traditional values and work attitudes were estimated in early 1990s by the Ukrainian elite between “a disadvantage” and “on par”. Obviously, consolidated efforts were needed to build Ukraine’s social capital, societal coherence and work ethic values. Those were absolutely essential to achieve sustainable success in market reforms and move this score in the future to higher than “on par” level. (Ukrainians have significantly progressed in becoming a nation driven by common values especially when external threats materialised).

7. Political institutions: score 1.96 (with a vision at 3.17). Relative to other former Soviet republics, Ukraine can be described as politically stable. As Dr. Hawrylyshyn stated in “Effectiveness of Countries”, “Political institutions function or malfunction depending on how power is aggragated, how it is used to direct resources and regulate relationships, whether it is seen as legitimate and just, forcibly imposed or voluntarily accepted.” Both in the Soviet period and afterwards, Ukraine, as perceived by man observers, has not been moving towards the market reforms as persistently as Baltics or Eltsin’s Russia. This can be explained by several factors, among them – traditional strong spiritual dependence of the ruling elite on Moscow (junior brother complex), fears that radical reforms may lead – due to temporary deterioration of living standards and growing social contrasts – to upheaval and subsequent ousting of the transitional forces from power. Besides, having been tailored to fit in a centralised system, Ukrainian economy is characterised by serious structural distortions (very high share of heavy industries, inadequately low share of consumer industries and high level of inter-republican specialisation, especially in heavy machine-building and military industries. The scoring for the vision alludes to the possibility (strong wish) that the country’s political system could become “on par” with a majority of democracies in the developed world. (This is the weakest link. Country’s economy and political system as well as institutions are still captured by profit-seeking interests, mainly, oligarchs. But important progress has been made in terms of democratic freedoms and civil society).

8. Economic system/structure: score 1.51 (with a vision 2.90). Ukraine has developed an ominous ferrous metal industry, that produced nearly half the cast iron, over 40% of the steel and rolled metal, and about a quarter of the steel pipe that were produced in the Soviet Union. The output of the energy and mining industry, especially fuel materials, also comprises a very high proportion of the Soviet total; the industry’s main products include coal, natural gas and iron ore. Manufacturing industries are most notable for their production of metallurgical and and other heavy industry equipment, diesel locomotives, tractors, and TV sets. If there is one area where Ukraine has proven itself capable of the world class technology and performance, it is the defence industry. Western companies will find Ukrainians advanced in laser, computer and medical technologies. Key challenge will be to use conversion of military grade technologies for stimulating R&D. However, due to outdated transport infrastructure and huge needs for its modernisation, the overall scoring for the vision may not exceed 2.90 in the long-term future meaning that Ukraine could struggle to turn this factor into “a comparative advantage”. (Armed conflict has brought about a huge cost to Ukraine’s GDP mainly due to the fact that old economic structure and outdated economic system have to a certain extent prevailed. Big question is whether there is enough domestic and foreign investment as well as qualified manpower to change the economic structure towards more value added and high tech under extremely adverse conditions).

Overall Country Rating. The 1992-dated aggregation by the Ukrainian elite of eight individual factor ratings resulted in the overall country effectiveness score at 2.08 (or a position of “a handicap” or “a disadvantage”. The 10-year forecast moved the country’s score to 2.75 (or almost to “on par”) whereas the vision of the majority of people who took part in this exercise placed the country’s scoring at 3.10 or firmly “on par” with majority of market-based democracies. (The stubborn fact is that the country’s place in competitiveness rating (as measured in WEF Global Competitiveness Index) was highest in 2012-2013 (73) and dropped by 12 positions to 85 in the 2016-2017 rating).

But despite a mixed record of the country, the 1992 assessments and visions were mainly correct. And what was absolutely clear from that exercise that all its participants sincerely shared and continue to share and uphold Bohdan’s Hawrylyshyn “obsessive” main vision – great, independent, modernised and competitive Ukraine.

A few photos and scans from personal archives:

2. The First IMI-Kyiv Flyer dating to 1990 when Ukraine was still a part of the USSR.

3. Photo with a Daimler Benz member of the board dating to 1991. 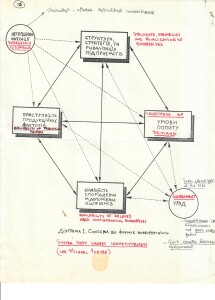 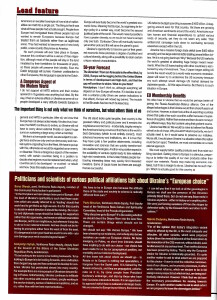 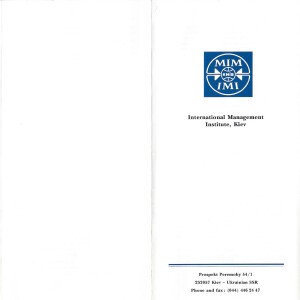 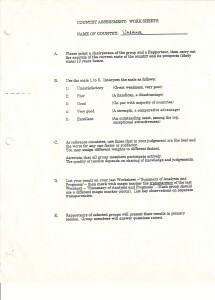 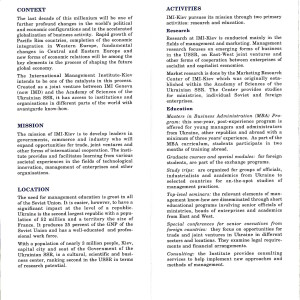 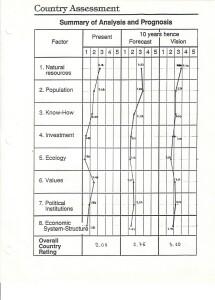 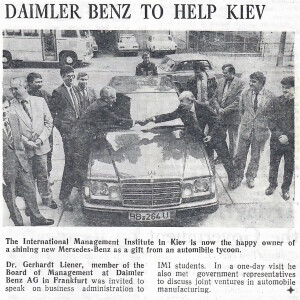 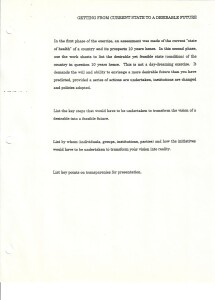 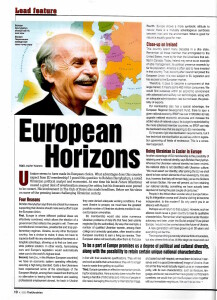