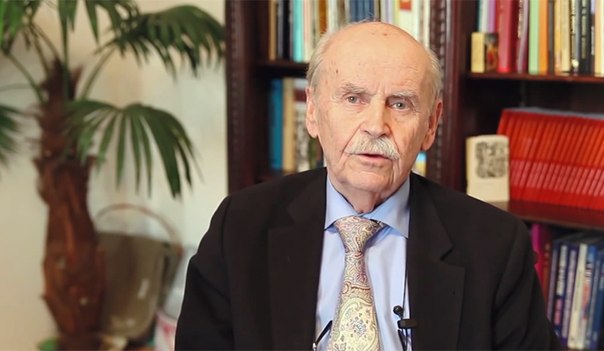 Bohdan Hawrylyshyn
was born in Koroptsi village, Ternopyl region. Before the end of World War II he was brought to Germany, where later in refugees’ camp obtained secondary education. In 1947 left for Canada where he worked as a wood—cutter, then as a waiter and was the first of post-war immigrants who entered Toronto University. In 1952 he obtained a degree in engineering, in 1954 — Masters degree. Having worked for multinational company he was sent for one year course to the International Management Institute in Switzerland.

In 1960 Mr. Hawrylyshyn started his career in educational sphere. For eight years he had been supervising training programs at IMI Geneva, teaching economics, global business environment, international operations management and public administration. In 1968 Bohdan Hawrylyshyn became the Director of the institute and remained its head for eighteen years. During his tenure at the Institute Bohdan Hawrylyshyn brought up a great number of top professionals for hundreds of companies all over the world.

Published papers of the scientist include more than 100 articles in management, managerial education, economic and political environment. He is the author of two books, one of these “The road map to the future — to the most efficient society” has won international recognition and has been published in eight languages.

Since 1988 Doctor Hawrylyshyn has committed his activity to Ukraine. He initiated establishment of the International Management Institute (MIM-Kyiv) by the Academy of Sciences of Ukraine and IMI-Geneva; it was the first institution in the former USSR which provided MBA program training.

In 1989 with active participation and organizational assistance of B.Hawrylyshyn an international charity “Vidrodzhennya” fund was set up in Kyiv, the institution is financed by George Soros. From the beginning of the fund activity to 1998 Bohdan Hawrylyshyn was the head of the Supervisory Board of this public organization, the purpose of which is to develop foundation of civil society in cultural, educational, scientific and social spheres.

In 1991 Dr. Hawrylyshyn created and became the head of the Council of Advisors to the Presidium of the Ukrainian Parliament that worked for seven years, was a member of the American-Ukrainian advisory board, an advisor to the first president of Ukraine, four chairmen of the Verkhovna Rada and three prime-ministers. Now Bohdan Hawrylyshyn is a board member of the World Academy of Art and Sciences, the head of Ukrainian National Scout Organization, a member of the executive committee of the Swiss International Policy Forum, the head of Supervisory Board of MIM-Kyiv. He also facilitated the establishment of the International Centre for Policy Studies and remained the head of its Supervisory Board up to 2006.

In Ukraine the fruitful activities of Dr. Hawrylyshyn are highly appreciated by broad community of education, science and state officials. He was elected a foreign member of the National Academy of Sciences of Ukraine and was awarded an Order of Merit, he is a merited scientist of Ukraine, an advisor to the Chairman of the Verkhovna Rada, holds honorary doctorates of Ternopyl Economic Academy, Stefanik University in Ivano-Frankivsk and Fedkovich University in Chernyvtsy.