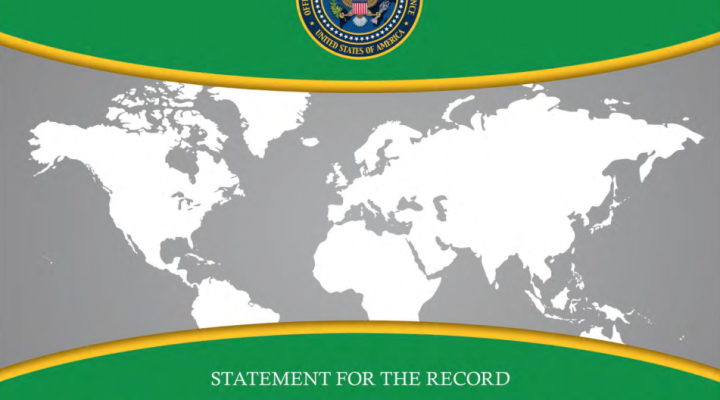 In early 2009, when the global financial meltdown was unravelling, the Director of the US National Intelligence, Dennis C. Blair, submitted to the Senate Select Committee on Intelligence a regular annual report “Annual Threat Assessment of the Intelligence Community”. Its main theme, of course, was the destructive impact of global economic crisis and its geopolitical implications.

But what’s relevant in this Report for the current situation is that in the chapter “Global Health” (p. 43) the text states: “The most pressing transnational health challenge for the United States is still the potential for emergence of a severe pandemic, with the primary candidate being a highly lethal influenza virus. The World Bank estimates that if the next pandemic virus is similar to the one that caused the 1918 pandemic, it could kill 71 million people worldwide and cause a major global recession with global costs exceeding $3 trillion. Other estimates, applying the 2.5 percent fatality rate from the 1918 pandemic to today’s population, reach 180 million deaths worldwide. Current threats include H5N1 influenza, a virus that, while primarily a poultry disease, continues to evolve and expand its geographic range”. [1]

The 2014 report continues to emphasize this clear and present global threat by stating that global health security risks arise mainly from “the emergence and spread of new or reemerging microbes; … the rise of drug-resistant pathogens; the acceleration of biological science capabilities and the risk that these capabilities might cause inadvertent release of pathogens; and adversaries’ acquisition, development, and use of weaponised agents. Infectious diseases, whether naturally caused, intentionally produced, or accidentally released, are still among the foremost health security threats”. The report, with its striking resonance to the 2020 COVID-19 pandemic, further warns that “previously unknown pathogens in humans are emerging and spreading primarily from animals… No one can predict which pathogen will be the next to spread to humans or when or where this will occur. However, humans remain vulnerable, especially when a pathogen with the potential to cause a pandemic emerges… Uncontrolled, such an outbreak would result in a global pandemic with suffering and death spreading globally in fewer than six months and would persist for approximately two years”.

In even more flabbergasting prophecy, the 2016 report continues to warn the USA goverment and its allies that “infectious diseases and vulnerabilities in the global supply chain for medical countermeasures (read: global dependence on China! – YP) will continue to pose a danger to US national security in 2016. Land-use changes will increase animal-to-human interactions and globalization will raise the potential for rapid cross-regional spread of disease, while the international community remains ill prepared to collectively coordinate and respond to disease threats. Influenza viruses, coronaviruses such as the one causing Middle Eastern Respiratory Syndrome (MERS), and haemorrhagic fever viruses such as Ebola are examples of infectious disease agents that are passed from animals to humans and can quickly pose regional or global threats… Many developed and developing nations remain unable to implement coordinated plans of action to prevent infectious disease outbreaks, strengthen global disease surveillance and response, rapidly share information, develop diagnostic tools and countermeasures, or maintain the safe transit of personnel and materials”.

Subsequent reports in 2017-2019 continue to openly warn the US leadership as well as its G7 partners about imminent global threats of a new virus pandemic and its mind-boggling human and economic costs. The World Bank estimated those costs at more than 100 million lives and 4.8% of global GDP or more than $3 trillion. Moreover, the US intelligence community clearly and openly warned that probability of new deadly pandemic remains very high and such “global health emergency” could lead to “major economic and societal disruptions, strain governmental and international resources, and increase calls on the United States for support”.

And, finally, 2019 report almost cried out in bold font: “We assess that the United States and the world will remain vulnerable to the next flu pandemic or large-scale outbreak of a contagious disease that could lead to massive rates of death and disability, severely affect the world economy, strain international resources” … And the overall conclusion follows that the world community, despite some progress made in healthcare sector and its emergency response capabilities, remains vulnerable and largely unprepared for more frequent outbreaks of infectious diseases in the future.

The above quotes more than adequately demonstrate a very paradoxical fact. The political elites in the USA and other developed countries, UK included, remain largely deaf and blind to the work of their own intelligence communities, which prepare their threat reports on the basis of close interaction with most advanced research and science communities.

If this is NOT so, then how the persistent warnings about the real and present threat of global pandemic that started more than 10 years ago correlate with the present situation?

How come then that two top countries (USA – 1st place and UK – the 2nd) in the 2019 Global Health Security Index that measures the preparedness of countries for epidemics and pandemics have nowadays the highest death rates in the world, while their healthcare systems still struggle to cope with shortages of the PPE and other basic supplies? [2]

What becomes now clear, more than ever, that, in the post-corona world, effective state and global governance and policymaking should be driven not so much by popular demand for panem et circenses that generates electoral votes but by different, more socially and globally responsible agendas based on conclusions and policy recommendations of strategic intelligence and scientific communities. Future survival depends, to a large extent, on science and research and effective implementation of their recommendations into day-to-day politics.