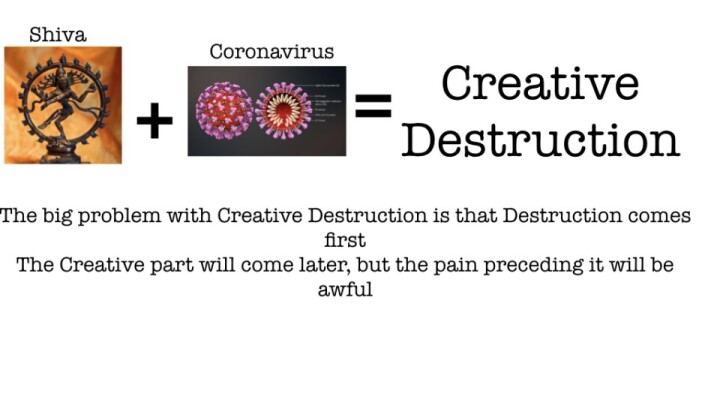 Amid some apocalyptic tunes coming from here and there, most of us still continue to live and act under the assumption that there will be “tomorrow”. And most of us, some intuitively and some consciously, just cannot accept the notion that, after a good and uncertain while, this tomorrow will be business as usual.

Here’s just a rather impulsive collection of thoughts as to what opportunities and for whom the coming ‘brave new post-W (post-Corona) world’ could create.

Where things will have to dramatically change is, undoubtedly, healthcare and their emergency quick response capabilities. Who can imagine now, after this biological war has taken, within a few months, more than 82,000 lives, that healthcare professionals facing mortal danger in the line of duty would return in the post-W future to ‘business as usual’ for the miserable pay they generally receive? I just can’t accept this idea. Let’s hope that the global hands clapping and cheering emotional response to support these professionals would evolve into consistent social and political pressures to trigger radical healthcare sector reform. Reform of such scope and substance that it may bear far-reaching consequences for the main principles of the market economy and lead to a dramatic review of the government fiscal policies and state budget expenditure patterns worldwide.

In addition, we might see a much quicker rise of digitised and personalised early diagnostic and preventive healthcare technologies because the W-crisis made it now more obvious than ever that massive testing and prevention campaigns cost far less than mass emergency production of ventilation and other lifesaving equipment.

Next obvious thing to happen could be a renewed emphasis on the countries’ biological warfare protection capabilities and resulting drive for building domestic production capabilities of relative essentials and elements. Existing pattern whereby China dominates as a sole producer of critical biodefence supplies and equipment to the rest of the world would probably be no longer acceptable, whatever the economic cost.

The W-crisis may also trigger some fundamental shifts in the global manufacturing scene. Here, the lessons yet to be fully comprehended could exponentially accelerate the following trends:

a) de-globalisation and, as a result, localisation of manufacturing because the model of China as the dominant global factory and biggest single exporter of literally everything to the rest of the world will no longer be politically viable. The world economic paradigm may dramatically change, contrary to the traditional dogmas of (least) cost/benefit and ultimate profitability as the most important drivers of global production and investment patterns. Import substitution may become a really big name of the new industrial game.

b) sweeping digitalization and robotization of all possible manufacturing and production processes;

Post W-crisis reality, with some lessons already being learned, may very well call for the re-think of dominant models of wealth distribution and social protection. A new balance would have to be found: under-paid critical professions (doctors, teachers, transportation, staples distribution systems, web quality content creation, cyber security, etc.) versus over-paid non-critical occupations (guess yourselves which are those). It’s not me who’s drawing this cynical “versus” juxtaposition but the W-reality itself.

Undoubtedly, the corporate world will have also to dramatically review a lot of principles and existing corporate foundations, including, first of all, governance and remuneration patterns. It is hard to imagine in the post-W world multi-million remuneration packages and golden parachutes for executives and board members in sectors where created value, if any at all, brings nothing essential for the betterment, safety and fulfilment of human life.

There will be a new impetus for structural (policy) changes to confront the global climate change shocks and for the development of new technologies to withstand these shocks. Many experts are starting to assume now that, in addition to the biological threats, the humanity will shortly face effects from climate and other human-induced global challenges that could have far stronger and more devastating effects upon the population and global economy than W-crisis per se. Is it far-fetched to suppose now that the governments’ plans to phase out gasoline and diesel cars in favour of fully electric vehicles could be significantly accelerated?

Life in new realities of bio, climate and other global threats, will stimulate much faster-track innovation and supporting IP systems in critically important sectors (health, education, food and energy production and distribution). Therefore, a much fiercer global competition for top disruptive (creative) talent, especially in those critically important sectors, could be expected. And it does mean the global competition of national education systems and standards. Brain drain from poorer countries could accelerate even further, while top destinations may start a radical overhaul of professional immigration policies towards substantial liberalisation.

In this context, top priority sector, where huge investment will be made after W-crisis is cybersecurity and web resilience. Internet may likely become more regionalised, more distributed and most probably space-based. Just imagine what might happen if, God forbid, there is a major technological fault or terrorist-linked lasting disruption of the global web during the life on quarantine?

Three more possible web-related changes: 1) strong growth in demand for quality and curated web content creation; 2) design and launch of top-quality distance learning systems; 3) high demand for good quality and safe online shopping and delivery services. Many, I’m sure, asked themselves a question in the present circumstances: what would it be like without Amazon, the global giant that now might very well be on even steeper curve to global dominance? But then, can the company of such critical importance remain in private hands, no matter how socially responsible these private hands are?

However, isolated life in ‘my-home-my-fortress’ also brings into light a realisation of the fact that in the post-W-crisis world, old brick-and-mortar “blue-collar” sectors and trades relating to maintenance of human dwellings and satisfaction of basic needs, including builders, plumbers, electricians, and other trades, will acquire a completely new dimension and probably will be also swept by technological and corporate change.

Another industry that may undergo a profound change through its own reinvention and maybe entirely new paradigm could be travel and tourism. Here, a sweeping ‘corporate massacre’ of unprecedented scale already has happened and is still being underway. But maybe this destruction is creative, and the sector will be reborn on the basis of advance technologies, dramatic upgrade of infrastructure (due to new health and sanitary requirements), much stricter visa and migration policies, enhanced travel security, and other limitations?

Finally, on the household level, we may probably witness a renewed thrust towards self-sustainability – at the household, family and even individual level – the phenomenon that seemed until very recently as an ‘outdated’ habit, particularly among younger generations. For instance, once technology and conditions allow, will not some metropolitan families be tempted to seriously consider home-based horticulture (production of some fruits and veggies), developing own hairdressing and beauty techniques, basic tailoring and cloth repair skills, mastering some elementary small home repairs, including computers and IT as well as other affordable DIY jobs?

Many of the above have already been in the making, one way or the other. But, despite the fact that the W-crisis has brought into the world, apart from irreplaceable massive loss of life, unprecedented destruction of economic value and massive disruption of established links, it may have also ignited ‘creative chaos’ that will bring about fundamental, if not revolutionary, economic, technological, cultural and political changes to shape the ‘brave new world’ to come.